Auditing is the process of examining whether the financial statements containing material misstatement. In doing so, auditors need to gather and evaluate audit evidence related to various audit assertions. 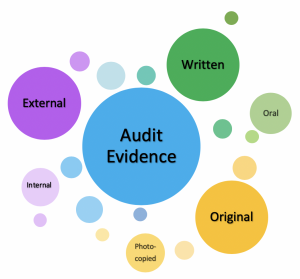 Audit evidence is the information auditors obtain in performing their audit work in order to form the basis of their opinion on financial statements. In this case, auditors have responsibilities to gather sufficient appropriate evidence on which to base their audit opinion.

Several factors such as type of evidence, quality and quantity of evidence, and audit procedures to gather evidence will decide whether auditors have obtained sufficient appropriate audit evidence in forming an opinion.

In performing the audit, auditors may obtain evidence of different types from different sources of information.

Types of audit evidence include:

Different types of audit evidence provide different quality which are the direct measurements of the reliability of the evidence. The decision of using which type of the evidence depends on the level of audit risks and availability of such evidence.

Qaulity or reliability of audit is highly affected by the type and sources of information auditors use as the evidence.

Below is an example of the level of quality or reliability of information used as evidence:

The reliability of audit evidence is heavily affected by the source and nature of the information including the preparation and maintenance of such information.

Sufficient evidence is the context that refers to quantity of audit evidence. The quantity of evidence that auditors need to gather will depend on what level of risk auditors have in the area being audited.

The quantity is also affected by the quality of evidence that auditors obtain. For example, auditors may need to obtain less evidence if the evidence obtained are of high quality.

Auditors should always consider the relevance and reliability of any information that they use as evidence while performing their audit work.

In this case, auditors need to obtain a good understanding of the client’s business and its control environment. This will help auditors to perform risk assessment procedures in order to assess the risk of material misstatement at both financial statements and assertion levels.

However, it is useful to note that the risk assessment procedures alone do not provide sufficient appropriate audit evidence for auditors to form their basis of opinion. They need to perform further audit procedures including tests of controls and substantive procedures.

Auditors usually perform the test of controls, if necessary, to evaluate the effectiveness of the internal controls in preventing and detecting material misstatement at the relevant assertion level.

It is necessary for auditors to perform tests of controls in two circumstances:

Substantive procedures which include test of details and substantive analytical procedures are the procedures that auditors need to perform in order to detect material misstatements at the assertion level.

Auditors should design and perform substantive procedures to be responsive to the level of detection risk taking the consideration of the results of tests of controls, if any.

In order to obtain sufficient appropriate audit evidence, auditors need to perform substantive procedures for all relevant assertions in each material class of transactions, account balances, and disclosures.