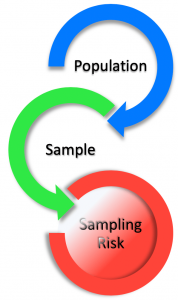 Usually, it is impossible or impractical for auditors to have time to review every record in an entire population; hence, they need to determine and rely upon a sample in performing their audit tests and making a conclusion based on the sample.

However, there may be a case that the erroneous inferences about a population from a sample are not due to the sample not representative of the population, but due to audit procedures are not appropriately performed.

Below is how the sampling risk is related to the audit tests and results of the audit work.